There has recently been a lot of media attention on the connection between being transgender and being autistic. The focus of much of this attention is Dr Kenneth Zucker, a psychologist whose gender clinic was closed down in 2015 for practising reparative therapy on children – behavioural therapy with the aim of ‘training’ children not to be transgender. He has been outspoken about his views that children with gender dysphoria are often autistic, and the implication that this somehow means they are not truly transgender.

Blaming trans identities on autism like this is directly harmful in many ways. Not just to autistic transgender people, but to other autistic people, other trans people, and to those who are neither.

When a person’s gender is doubted because they are autistic, this paves the way for removing autistic people’s agency in all kinds of other ways. If we can’t know this central aspect of our identity, we surely can’t know how we feel, what we like, or who we are. In short, it implies that we are not truly people, and that our existence, experiences, and identities are for other people to define. This is just another facet of dehumanising autistic people, and gender is certainly not the only area in which this happens.

Not only that, but the belief that it’s even theoretically possible for anyone besides the individual in question to know what someone’s gender is. That’s just not how gender works! No-one really understand what gender is, or what it means, or where it comes from. The only thing we know for sure is that it’s internal, subjective, and personal. You can’t prove or test someone else’s gender any more than you can prove or test their favourite colour. The idea that it can be tested is constantly used to invalidate trans people. Our genders are doubted or disbelieved if we fail to adequately ‘prove’ ourselves to everyone else – if we express too many or too few gender stereotypes, if we are too old or too young, if we claim to be nonbinary or our description of our identity is too complicated or confusing.

When Zucker and others like him talk about autistic trans people, it is entirely with the implication that a person cannot be both. If a child goes to a gender clinic for dysphoria and is found to be autistic, the assumption is that they therefore must not be transgender. Their entire experience of gender is blamed on autism and brushed off as an arbitrary ‘fixation’.

Perhaps less common but equally damaging is when problems related to autism are blamed on the fact someone is transgender, rather than vice versa. If a transgender person seeks support or assessment for autism, any autistic trait they point out may be brushed off as a result of being transgender. The assumption people make in these cases is again that it’s impossible for someone who is transgender to also be autistic.

But autistic transgender people do exist. I am right here, existing – so are many of my friends. And if anecdotal evidence isn’t good enough, there is increasing research showing a correlation between being transgender and autistic among children and adults.

It hurts everyone else

Much of the concern over autistic and transgender people – particularly children – seems to be rooted in worries for people who are not those things, but falsely believe that they are. If a child becomes mistakenly convinced that they are transgender, that they will be forced into life-altering hormones and surgeries. Or if a non-autistic person believes they are autistic, that they will be permanently labelled and coddled with no hope of change.

Those two approaches are not the only options, though. The best option is to allow someone to explore their feelings, support them in gaining self-understanding, and accept their identity whatever it turns out to be. It is not complicated, and it’s only scary if you are still holding onto the belief that being either autistic or transgender – or, perish the thought, both – is a terrible thing to be. Which it’s not. I am, along with countless others like me, living proof of that.

I haven’t explicitly talked about gender on this blog before. I haven’t exactly been avoiding the topic, it just never seemed relevant. But then as I avoided mentioning it for longer, it became a Big Deal, so I avoided it even more.

Before I dive into talking about myself, I’ll start with explaining some words. I’m going to try to make this aimed at absolute beginners who have barely heard these words before.

I’ll start with possibly the most important distinction of all: sex vs. gender.

Sex is very rarely actually relevant. The only people that really need information about a person’s sex are their doctors (and even then, only sometimes!), and their sexual partners (likewise!). In any other situation, it is gender that is relevant. Gender tells you how a person should be referred to, how they should be treated, what groups and facilities they belong in, and all of that other important stuff. Gender is also way more complicated, and it’s where most people get confused – especially if they’re never thought or learned about it much before.

It all starts when you’re born, and the doctor picks you up and says “It’s a ____!”. At that point, you have officially been given your assigned-at-birth gender. That just means that someone assigned it to you when you were born. You didn’t pick it yourself (you were a baby!), someone else picked for you. Generally when people assign gender, they base it on observable sex characteristics (the doctor looks at the baby’s genitals to decide).

For the majority of people, that’s the whole story. They spend their life comfortably agreeing with the doctor’s assigned gender. Those people are called cisgender. That just means their actual gender identity is the same as the gender they were assigned at birth. Because babies (except for potentially a tiny number of exceptions) are always assigned as either ‘boys’ or ‘girls’, cisgender people are always binary. That means a gender identity that fits one of the two most common options – men and women.

For some people, they later realise that the doctor’s assigned-at-birth gender was wrong. Some people might discover that as very young kids, other people don’t notice until they are adults, or any range of ages. Those people are transgender. Their actual gender identity is different from what they were assigned at birth. When transgender people realise that their gender identity is not what they were originally told, they may do various things to help themselves feel comfortable. Things like:

Some transgender people are binary – men or women. Others are nonbinary – which just means, not simply men or women. People might identify as nonbinary if the various factors of their gender identity do not match up (for example, they might prefer to be called ‘he’, but prefer to have female sex characteristics), if they have preferences which don’t fit either option (for example, they might prefer to be called ‘they’ instead of he or she, or to have sex characteristics which aren’t considered either male or female), if their gender identity changes over time (for example, they sometimes feel like a man and sometimes like a woman). There are countless different ways to be nonbinary! And there are countless labels which describe all those different types of nonbinary. Things like: agender, androgyne, genderfluid, and many more. I couldn’t possibly describe all of the possibilities.

I’ve made a diagram to summarise how all those different words are connected with each other: 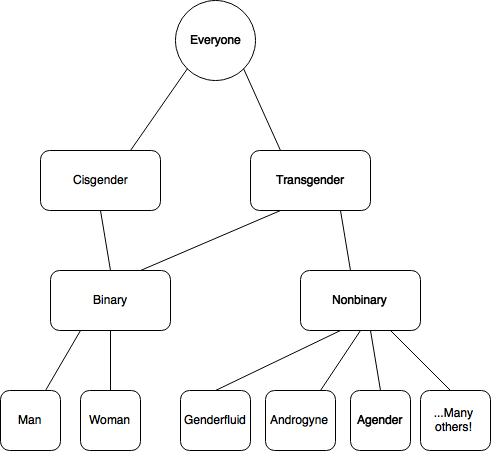 Hopefully my general explanations above have demonstrated why gender matters, and what it means. Some basic guidelines for being a good person when it comes to gender:

I’d also like to add a disclaimer here. Everything in this post is controversial and debatable. Some people will disagree with me about my definitions or my categories, some people will be upset that I’ve missed things or think I’ve included things that aren’t necessary, some people will feel their identity can’t be described using my framework. All of that is important, and you should always, always prioritise an individual’s feelings and preferences over some general definition you have. I’ve tried to be as neutral as possible, but I’ve also been necessarily brief and I couldn’t possibly explain all of the nuances of this topic in one post. As long as you follow the ‘good person’ rules above, you should be fine. Never stop learning!

I’ve handily highlighted myself on the diagram from above: 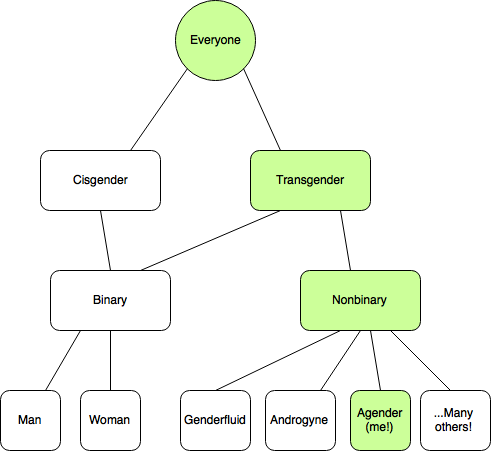 So, for readers of this blog, the relevant information about me is simple:

I hope this has helped you learn something, and maybe cleared up some misconceptions!

I'm an Autistic mama blogging about memories and life.

Days in the life of an adult on the spectrum

Better to be kind than right

perspectives from the spectrum

"you were not put here on this earth to be laughed at and obscured. and anything counts as yelling." -Meda Kahn, autistic activist

Adding just one more to my cluttered life.

Living in a Neurotypical World

or: How I Learned to Avoid Toxic Situations and Love Myself

Autism through the Medium of Cats

Thoughts on mostly Autism, sometimes on depression and cats

Amusing musings from an Aspergian on planet Earth.

A blog by an autistic asexual